Cannondale did a lot of fade jobs in the early-mid 90s, and the purple ones are some of the coolest. This one, a 54cm from '93 or so, was too cheap to pass up - $60, including functional Forté (Performance) carbon/alloy fork.  Including shipping, about $85. Cheap.

Having just bought up a bunch of NOS XTR/XT stuff from Murphy, the shifters are brand-new NOS XT 9-speed, and the rear derailer is an NOS XTR 8-speed (works fine). The brakes are Dura-Ace 7400 (parts bin), as are the cranks. This generation is among the more elegant Shimano made, with the caveat/bummer that the 7400 derailer only works with 8-speed shifters, which aren't supported in this garage.

The Rolfs aren't going to stay on for city duty, but they look cool with the yellow Cannondale script.

The Steelman stem is now an extremely expensive item ($400?), but I had it in the bin so WTF. 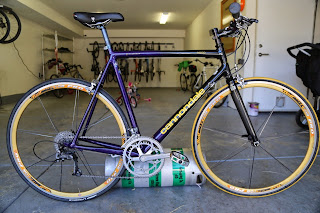 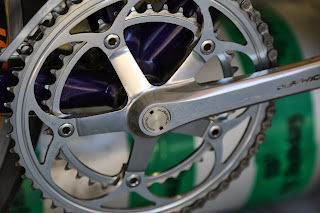 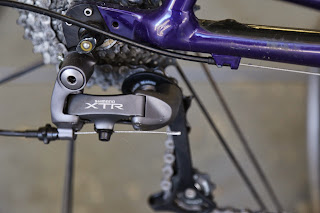 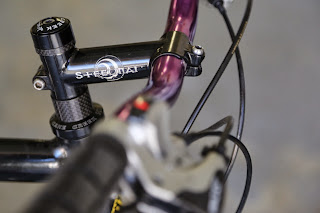